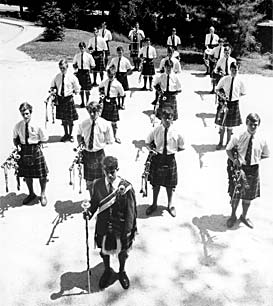 CHA Pipers at parade rest in front of the Exchange.
(click on photo to enlarge)

No blueprint was available, so Bill Reeves went ahead on his own one May morning to organize a student bagpipe band at C.H.A.

The idea of boys, with little or no musical training, learning to play the Scottish pipes might have turned off a less determined man, but math instructor and musician Reeves thought why not? Why not, indeed!

Today the school has the only bagpipe marching band in the Philadelphia area, unique and quite expert. "It wasn't easy," Mr. Reeves remembers. "I was a complete novice on the pipes myself, but I got hold of Alex Kennedy of the Germantown Highlanders, and seven boys and I began lessons with him on the practice chanter. It was some months before we were allowed to graduate to real bagpipes – a fickle instrument, but one you learn to love more and more." 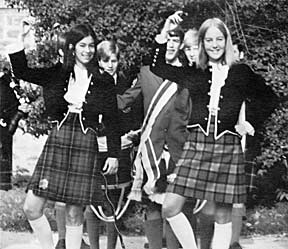 That was in 1966. During the winter, strange wails and sobs floated up from the Pipers' basement practice room as they struggled with the Skye Boat Song and "Scotland the Brave." They were learning.

The following spring the group was ready for its first professional appearance, and on Blue and Blue Day, led by Drum Major Doug Updegrave, they struck out from the main school building across St. Martin's Green, to open the afternoon field events. Quite a sight in their smart kilts, in step and in tune.

Now grown to a total of 16 pipers and four drummers, they are somewhat of a Chestnut Hill institution as they traditionally open the Main Street Fair each fall, play at everything from debut parties to Fire Prevention Week, and lend their colorful presence to Princeton Homecoming, sponsored by the class of '34. They have also entered competition, playing at the Delaware Highland Gathering and the Newtown Square Highland Games. "We didn't win any prizes, but it was good experience," Mr. Reeves says. 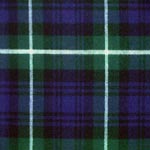 Of course any band has the inevitable money problems. From the beginning the Pipers' expenses have been underwritten by gifts from C.H.A. mothers, friends and also from Mr. Reeves. "Economically, we survive by contributions, and every now and then we get a windfall," he says. "The money goes for kilts, pipes, and our cleaning bill which is stupendous! Right now we need glengarrys (caps), and we'd like to have uniform shoes for all the boys someday."

The boys wear the dark Lamont tartan, chosen because it was the family tartan of charter Piper Charlie Hodge, a senior last year, whose mother generously helped with the initial costs of organizing the band. Dark blue jackets over white shirts, blue socks, and pipe covers to match the kilts complete the striking outfits. This year each Piper wears a small patch of the red Blake tartan on his right side. It is in memory of one of C.H.A.'s first Pipers, Geoff Blake, a member of the class of '69 who, with his sister Sally, was killed in an automobile accident last summer in Canada.

It is said the Scottish courts of justice once ruled that a man carrying bagpipes was a man carrying a weapon, "so inspiring was the music of the pipers to the clans in battle." Hillers find it that way too, and it's hard to imagine anyone so stoic as to be unmoved by the nasal sing-song of the Gaelic Piob Mhor.

Note: Bill Reeves and the CHA Pipers are briefly mentioned in the Spring 2010 issue of CHA•nnels (page 4, par. 4).

For several years, a number of CHA Pipers traveled to St. Ann's, Nova Scotia (on the Cabot Trail of Cape Breton Island) to attend a summer camp for 8- to 18-year-olds called the Gaelic College of Celtic Folk Arts. Students hailed from all over Canada and the U.S., with many of the talented instructors coming over from Scotland for the summer.

Every morning around 8:00, we donned our kilts and gathered on the central parade grounds to march, usually witnessed by an appreciative audience of tourists. Following the half-hour parade, we changed into more comfortable camp attire and spent each day taking classes in piping, drumming, highland dancing, and Gaelic language. Evening entertainment often included square dances and piping demonstrations by instructors and honored guests.

When it was time to do our laundry, we would hitch-hike to the nearby village of Baddeck, and quickly learned it was easier to catch a ride from the locals if we wore our kilts instead of casual wear!

Toward the end of our camp session, all the students demonstrated their skills on stage in a competition known as the Gaelic Mod, graded by a panel of judges. All in all, it was a unique and enjoyable experience.

Initially, we flew via puddle-jumper into Sydney, NS from Philly and were picked up by van to be brought to the Gaelic College. Then, in the summer of '69, it was Bill Reeves who led our little group on a road-trip from CHA in one of those blue International Carry-all vans the school used for commuter students. We were fortunate to spend 2-3 days at the Hastings' cottage on Squirrel Island (by ferry from Boothbay Harbor, see map) on the way up to Nova Scotia, and again on the way back – a fun and relaxing respite.

However, upon our return to Chestnut Hill, as we were dropping off Bill and Chips Ehrhorn, we were shocked to learn from their mother, Mary – who rushed outside to tell us the news – that Geoff and Sally Blake had been killed in a car accident in New Brunswick during a spell of dense fog (see Evening Bulletin article). As the tragic news sunk in, we were further spooked by the realization that our return trip had taken us within a ¼-mile of the accident on the same afternoon. 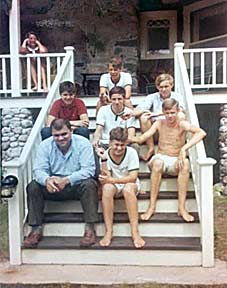 "Bull" Reeves and some Gaelic College
campers at the Hastings cottage on
Squirrel Island, Maine.
(click on image to enlarge) 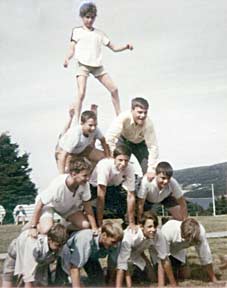 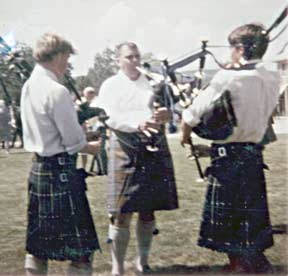 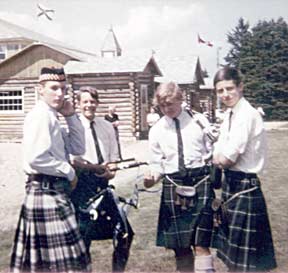