Oliver!  |  Mutiny on the Bounty

C.H. Academy Players "Do It Again" With Superb Performance of Oliver! 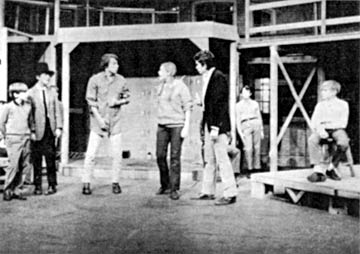 Now and then there comes a time when a blending of certain art forms creates a happy "marriage" of two excellent medias. Such an example was produced by the Chestnut Hill Academy Players in an exhilarating performance of the Broadway musical, "Oliver!" which was presented to a full-house capacity of over 500 on three successive evenings, last Thursday, Friday, and Saturday in the school's gymnasium.

Dickens' novel was the inspiration for the book, music and lyrics by Lionel Bart in which the story was considerably enhanced by the musical adaptation. Too often a great play or novel is marred when made into a musical and is often a case of girding the lily with songs and dances which get in the way of the meaning and action of the original drama.

Bart's genius lies in having taken the Victorian classic and eliminating its ponderosity by speeding up the action and streamlining the characterizations, thus giving a modern freshness to Dickensonian humor and pathos with concise and colorful music which sets the tempo of the play. The result is excellent theatre.

The Chestnut Hill Academy Players continue to outdo themselves each year by their extraordinarily successful productions and fine teamwork of actors, musicians, stage designers and workers. As in the past, the female characters were portrayed by members of Springside's upper school.

The expanded cast of 60 from the original 48 of the Broadway production was the result of the tremendous response to tryouts. This production marked the début of a new musical director, CHA alumus and member of the music faculty, Richard Brodhead, the former pupil and protege of Albert Conkey, Chairman of CHA's Music Department, who persuaded the talented young composer to take over in this capacity in this year's production.

With Mr. Conkey as Music Advisor, an excellent 14-piece orchestra was assembled from the nucleus of the Chestnut Hill Community Orchestra. Under Brodhead's direction and editing of the music, it provided excellent coordination with the acting and dramatic movement of the play. The stage direction was in the capable hands of Mr. Tobey Sindt.


(Note: Oliver! videos are not from the
CHA Players production of Dec. 1969.)

The title role was superbly played by fifth-grader Michael Kingsley, grandson of Headmaster Emeritus, Robert A. Kingsley – a part which could have been maudlin in an actor of lesser ability. Michael played it with remarkable understatement and sincerity, from the first scene where as the bold youngster of the orphanage-workhouse he asks for an additional portion of gruel, to the final scene in which he is reunited with the distinguished Mr. Brownlow who is revealed to be the boy's grandfather (played with regal dignity by Chris Wallace).

Tessa Merritt is excellent as the shrill, overbearing wife of the hen-pecked undertaker, Mr. Sowerberry (played by Ian Mills with appropriate mournful demeanor) to whom the young Oliver is sold by the bumptious Mr. Bumble (Doug Doman). Fagin, who as head of the pick-pocketing gang of street urchins takes on Oliver as an apprentice after the boy's escape from the Sowerberrys, is amusingly and warmly portrayed by Rip Hastings.

Tom Lee is colorful as the Artful Dodger who initiates Oliver into his first pick-pocketing venture. David Lindy lends credible villainy to the role of Bill Sykes who, as the fence for the stolen goods of Fagin's crew, eventually murders his loyal "girl friend", Nancy (interpreted by pretty Katie Webb with restrained emotion who sings with conviction and is most effective in her rendition of "As Long as He Needs Me").

Gwen Griffiths was particularly commendable as the aggressive Widow Corney. Her clear, powerful voice and warm personality were ideal for the part.

Other parts worthy of mention include Nancy Thompson as Mrs. Bedwin, the governess in Brownlow's employ who lovingly looks after Oliver when he is taken into the latter's home; Linda Blough as Bet, Ann Torrey as Old Sally, and Bob Peck as Dr. Grimwig. Outstanding are the various group characterizations and choral (as well as solo) singing of the boys and girls from the fifth through the upper school grades.

The set design and lighting by faculty member Mr. Owen Boyer and CHA '68 alumnus Randy Engels were keyed to the proper moods of the play and facilitated the flowing movement of the entire cast. Against the cool, somber colors of the stark background, Mrs. Szamody's costumes provided the right accents. Occasional bright reds and yellows set off the subdued beige and brown tones of the street urchins' ragged clothing.

Mr. Brodhead's orchestra heightened and unified the swift-paced action of the drama. Also notable were the beautiful violin obligatos of Arthur Jordan, concertmeister.

The naturalness and lively enthusiasm of the entire cast projected itself to the responsive audience of all ages which gave the Players a rewarding standing ovation. 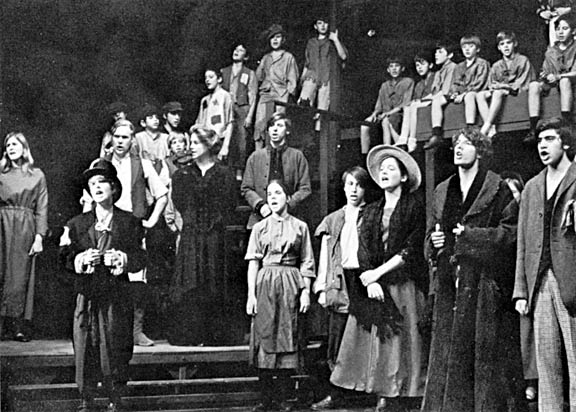