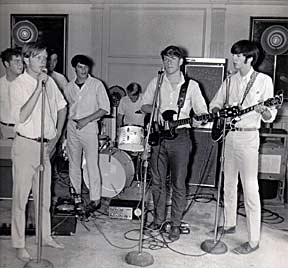 One of the newer combos in town is Section 5, which played at the luncheon and swimming party given by Mrs. Nina Cooke Emlen and Mrs. George P. Millington Jr. for debutante Bettina Weeks Heist.

The combo performed all afternoon in the living room of Swallowfield, the Emlen home in Blue Bell.

Eighty persons attended the party for Bettina, who is the daughter of Mrs. Elizabeth Weeks Heist, of Chestnut Hill. The late Daniel S. Heist was the deb's father.

Bettina, who was graduated Tuesday from the Springside School, will make her debut at a supper dance June 22 at The Barn in Eddington. She will be presented with debs Anne Barton Bromley and Jane Biddle Merritt. 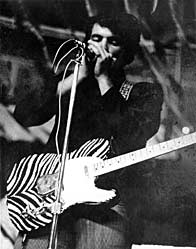 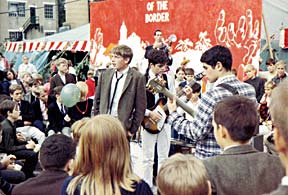 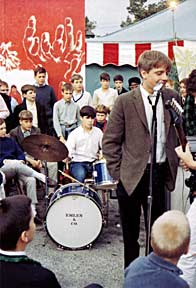 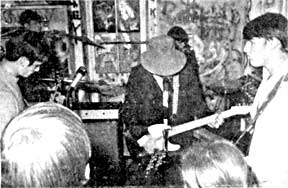 It was standing room only for the Loophole dance
Saturday night to hear the combo The Flying Pyg;
from left, Mike Disston, Tom Stone, Carl Norris,
with Charlie Thompson on drums. Teens who turned
up to paint, plaster and decorate for the dance
got one-third off of memberships, on sale at $3.

Note: Depending upon the speed of your connection, it may take several minutes for the above songs to load in your browser.