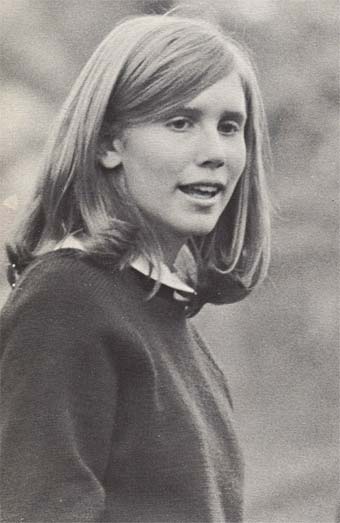 I see you, a child
In a garden sheltered for buds and playtime,
Listening as if beguiled
By a fancy beyond your years and the flowering maytime.
The print is faded: soon there will be
No trace of that pose enthralling,
Nor visible echo of my voice distantly calling
“Wait! Wait for me!”

Then I turn the page
To a girl who stands like a questioning iris
By the waterside, at an age
That asks every mirror to tell what the heart’s desire is.
The answer she finds in that oracle stream
Only time could affirm or disprove,
Yet I wish I was there to venture a warning, “Love
Is not what you dream.”

Next, you appear
As if garlands of wild felicity crowned you –
Courted, caressed, you wear
Like immortelles the lovers and friends around you.
“They will not last you, rain or shine,
They are but straws and shadows,”
I cry: “Give not to those charming desperadoes
What was made to be mine.”

One picture is missing –
The last. It would show me a tree stripped bare
By intemperate gales, her amazing
Noonday of blossom spoilt which promised so fair.
Yet, scanning those scenes at your heyday taken,
I tremble, as one who must view
In the crystal a doom he could never deflect – yes, I too
Am fruitlessly shaken.

I close the book;
But the past slides out of its leaves to haunt me
And it seems, wherever I look,
Phantoms of irreclaimable happiness taunt me.
Then I see her, petalled in new-blown hours,
Beside me – “All you love most there
Has blossomed again,” she murmurs, “all that you missed there
Has grown to be yours.”

His sister, Sara Wetherell Blake, 16, was killed instantly in the crash. The youth died in St. John General Hospital.

The accident occurred at 2.15 p.m. Sunday on Rothesay Ave., just north of St. John, in heavy fog and rain.

The Blakes had been visiting their grandparents, Mr. and Mrs. Azel Blake, of Rothesay, a suburb of St. John. Geoffrey Blake was driving a car in which his sister was the only passenger.

Young Blake was graduated from Chestnut Hill Academy, where he had been captain of the soccer team, and was to enter Yale University in September. He won the gold medal, the highest award given a senior, for being the “most representative senior” at the Academy.

Miss Blake would have entered her senior year at Springside School, Chestnut Hill in September.